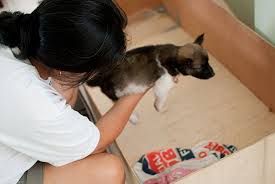 A British couple whose beloved dog died in June said they have double the love after attempts to clone the canine resulted in the births of two puppies. Richard Remde and Laura Jacques of West Yorkshire, England, said they were devastated when their boxer, Dylan, died from an inoperable brain tumor in June, so they paid South Korea’s Sooam Biotech Research Foundation $100,000 to attempt to clone Dylan.

The first cloned puppy, Chance, was born via cesarean section Saturday, and the second, Shadow, was born naturally early Monday. Both dogs were named after characters in Jacques’ favorite movie, Disney’s Homeward Bound: The Incredible Journey. “Even as a puppy of just a few minutes old I can’t believe how much he looks like Dylan,” Jacques told The Guardian shortly after Chance’s birth. “All the colorings and patterns on his body are in exactly the same places as Dylan had them.”

“I had had Dylan since he was a puppy,” she said. “I mothered him so much, he was my baby, my child, my entire world.” The couple are chronicling the development of the puppies on a Twitter account called We Loved Dylan.

Sooam Biotech, the only firm in the world currently offering commercial canine cloning, said Dylan’s clones were unique because the tissue samples were taken nearly two weeks after his death. Previously, tissue samples for cloning were taken no more than five days after death. “This is the first case we have had where cells have been taken from a dead dog after a very long time,” Sooam scientist David Kim said. “Hopefully it will allow us to extend the time after death that we can take cells for cloning.”