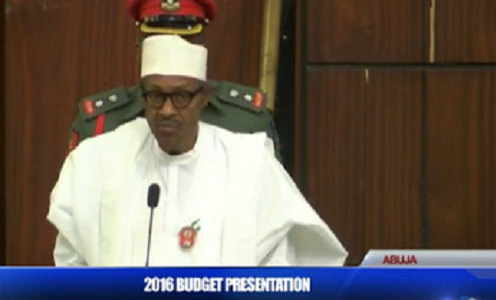 President Muhammadu Buhari on Tuesday apologized to Nigerians for the queues that have refused to disappear from filling stations across the country, ascribing the lingering fuel scarcity to the handiwork of rent seekers, which he said his administration is working hard to check.

He made the apology while presenting the 2016 budget, which he described as the budget that will stimulate the economy, at a joint session of the National Assembly.

The budget presentation, which centered on Nigerians’ ability to change the fortune of the country, was at intervals, interjected by applause from lawmakers.

The president said about N2.1 trillion of the N6 .08 trillion budget will be financed through foreign and domestic loans.

According to Buhari, the loans will be used for capital project, adding that 30 percent of the budget is going to capital expenditure, the first in many years.

He further stated that the Federal Government in conjunction with state governments, will employ 500,000 graduate teachers into primary schools.

He said already data of the poorest Nigerians are being gathered for conditional cash transfer, which will be domiciled in the Office of the Vice President. He also pledged to implement the school feeding programme as promised during the electioneering campaigns.

While admitting the challenges before the government are high, President Buhari said “By the grace of God and sheer will of Nigerians, we’ll come out stronger and more united”.

On the free-falling value of the Naira, the president said he has been assured by the Central Bank Governor that all hands are on deck to manage the pressure on the Naira and manage the country’s foreign exchange.

While sympathising with Nigerians having problems sourcing foreign exchange for business, the president declared that “Nigeria is open for business, but the interest of all Nigerians must be protected”.