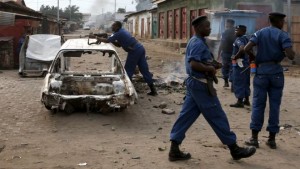 The African Union, discussing the situation in Burundi, says Africa will “not allow another genocide to take place on its soil”. There are concerns that the recent deadly violence could spiral into civil war and possible ethnic conflict. Last Friday, 87 people were killed in clashes in the capital, Bujumbura, the army said.

Protests in Burundi began in April when President Pierre Nkurunziza announced he would seek a third term in office. AU Peace and Security Commissioner Smail Chergui has tweeted that the “clear” message coming from the AU is that the “killings in Burundi must stop immediately”.

The government has said there is no threat of genocide.  The AU’s peace and security council has been discussing sending an AU force to Burundi. UN High Commissioner for Human Rights Zeid Ra’ad al-Hussein said on Thursday that “Burundi is at bursting point, on the very cusp of a civil war” which could have “ethnic overtones” similar to past conflicts in Burundi.

Mr al-Hussein has been asked by the UN Human Rights Council to send independent investigators to Burundi, the AFP news agency reports. An AU fact-finding mission returned from Burundi on Sunday and in its preliminary findings it said “members of the team heard reports of arbitrary killings, torture and the “arbitrary… closure of some civil society organisations and the media”.