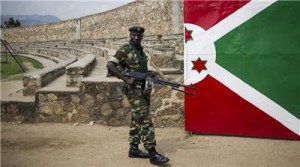 Burundi is on the brink of civil war and will need regional mediation to establish a peace process between the government and opposition to prevent further bloodshed, a US envoy said.

Thomas Perriello, the US special envoy for Africa’s Great Lakes region, said on Thursday that Burundi is “facing a real possibility of civil war,” though there is still “a window, no matter how small, to get a peace process going”.

“The most urgent thing is a regionally mediated dialogue that will deal with the crisis itself,” he said. But regional efforts to cool Burundi’s crisis have stumbled, despite calls by the African Union and East African states for dialogue.

Perriello said the international community has kept a close watch on Burundi and the extension of sanctions and the preparation of a peacekeeping force are among the options.