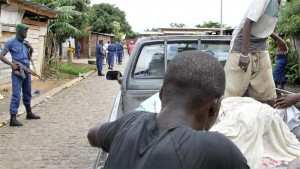 Nkurunziza’s spokesman Gervais Abayeho told Al Jazeera on Saturday, however, that Burundi does not need a peacekeeping force. “We will not allow foreign troops in Burundi. We don’t need them,” Abayeho said. “We have a legal and democratically elected government that should be consulted before making such decisions.

“We are a troop-contributing country to several African Union peacekeeping missions in Africa and now they want to bring peacekeepers to our country? Why don’t they just return our troops if they think we need help here?” The African Union gave the Burundi government 96 hours to cooperate fully and accept the deployment of peacekeepers, warning that it reserved the right to enforce its decision to send in forces – as per its charter.

Al Jazeera’s Mohammed Adow, reporting from the capital Bujumbura, said the fallout of the political crisis is seriously damaging the economy of one of the poorest countries in the world. “Unemployment is on the rise and and so are the prices of basic goods,” our correspondent said. “For the first time since the end of Burundi’s civil war a decade ago, the economy is set to contract – a result of months of upheaval.”

At least 87 people were killed last week in the African nation in the worst violence in months linked to Nkurunziza’s disputed third term. The 47-member Human Rights Council approved by consensus on Thursday in Geneva, Switzerland, a text that calls for the UN human rights chief to send in a mission of experts who are to report regularly on the human rights situation in Burundi.