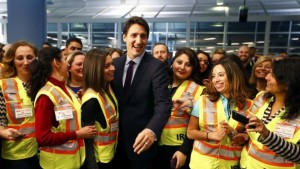 The first military plane carrying Syrian refugees to be resettled in Canada has arrived in the country. Welcoming the 163 refugees, new Prime Minister Justin Trudeau said his country was “showing the world how to open our hearts”. The newly elected Liberal government has pledged to take in 25,000 refugees by the end of February.

Canada’s stance on the issue differs sharply to that of the US, which has been reluctant to take in migrants. Another plane is due in Montreal on Saturday. Immigration Minister John McCallum said all 10 provinces in Canada are in favour of accepting the refugees.

“This is a great moment for Canada,” he said. “This shows the way we really are. It truly is a non-partisan, national project.”

Since early November, hundreds of Syrians have already arrived in Canada via commercial aircraft. A total of about 300 Syrians will arrive this week. The Toronto Star, the country’s largest-circulation daily newspaper, ran a cover story on Thursday welcoming the refugees.