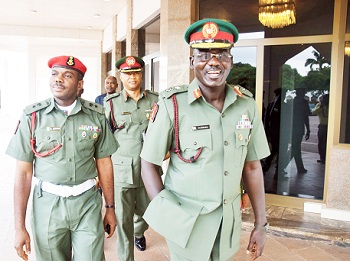 There was pandemonium in Zaria, Kaduna State on Saturday as suspected members of the Islamic Movement in Nigeria attempted to assassinate the Chief of Army Staff, Lt.-Gen. Tukur Buratai.

It was learnt that Lt.-Gen. Buratai was in Zaria for the Passing Out Parade of the 73rd Regular Recruits Intake (RRI) at the Nigerian Army depot, Zaria.

Trouble reportedly started when the Shi’ites, who had blocked the Samaru-PZ road in self-defense, apparently following a clash yesterday with members of the Darika sect in Gatsari area of Zaria, were directed by soldiers to leave the highway. But they refused.

An attempt to clear the sect members’ road blockade reportedly led to the use of force by the soldiers.

The Nigerian Army, however, described the incident as an attempted assassination on Buratai.

Shiites attempt to assassinate the Chief of Army Staff in Zaria