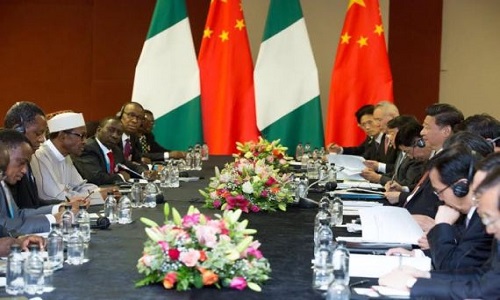 President Muhammadu Buhari says China remains a strategic and dependable ally in his administration’s determination to change the direction and content of governance including the management of national resources with priority on accountability, transparency and result-orientation in governance.

The president was quoted as saying this on Saturday in South Africa in his address at the round-table of Chinese and African leaders at the conclusion of the Johannesburg Summit of the Forum on China-Africa Cooperation (FOCAC).

The Special Adviser to the President on Media and Publicity, Femi Adesina, in a statement, quoted Buhari as saying that since he assumed office on May 29, his government had embarked on the task of re-focusing governance on the real needs of the vast majority of Nigerians.

“President Buhari said he was confident that China would always stand shoulder to shoulder with his administration in its quest to fulfill the aspirations of Nigerians to propel them to prosperity”, the statement read.

It added that Buhari commended the theme of the Second Summit, “China-Africa Progressing Together: Win-Win Cooperation for Common Development” and expressed optimism that it would engender the right platform to engage Africa in such fields of human endeavours as provision of essential infrastructure, skills development and capacity building, diversification of economies and beneficiation of resources.

“Buhari identified with the laudable objectives of FOCAC in cultivating, fostering and deepening political, economic, technological, social and other forms of relations between China and Africa.

“He specifically lauded China for the vision behind the establishment of FOCAC as a platform for higher level Africa-China relationship”, Adesina said in the statement.

He quoted the president as stressing that “Africa expects Chinese investment flows to the real sector of our economies to promote African enterprises. Our over-riding objectives are to tackle the challenge of unemployment, wealth creation, food security and industrialisation”.

It would be recalled that at the opening meeting of the Forum, Chinese President Xi Jinping told African leaders that his country would pump $60 billion (39.71 billion pound) into development projects, cancel some debt and boost agriculture under a three-year plan that will extend Beijing’s influence in the continent.