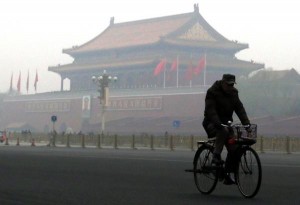 Officials in a Chinese city ordered a restaurant to stop charging customers to breathe clean air amid intense smog in the country. The restaurant in Zhangjiagang was found to be adding an “air cleaning fee” of about $0.15 to each customer’s bill to offset the cost of the eatery’s new air filtration system, which was installed amid smog warnings in the region.

Customers complained to the city’s Consumer Pricing Bureau, which ordered the restaurant to cease the practice. An official told the state-run Xinhua news agencythe filtered air could not be sold as a commodity because diners were not given the option of whether or not to breathe inside the facility.

Smog in the capital, Beijing, was so thick last week that the city issued its first-ever red alert for air quality. The alert involved a three-day closing of factories, construction sites and schools.