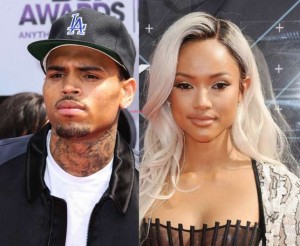 Its quite confusing for everyone these days to place exactly where Chris Brown’s heart is.

The award winning singer seems to have pissed off a few of his fans after his decision to include a bonus track on his forthcoming album -Royalty – to his ex-girlfriend, Karrueche Tran.

An official tracklist for both the standard and deluxe editions of the singer’s highly anticipated album dropped online on Monday, November 30, the song title ‘KAE’ got fans talking.

While the singer’s fans are eager for Royalty’s release on December 18, it appears some fans aren’t too happy, with rumors suggesting that one of Brown’s deluxe bonus tracks, ‘KAE,’ is dedicated to his model ex.

However, Breezy has not been shy about referencing his past relationship with Tran in his music, most recently releasing a new song titled ‘The Breakup’ on his surprise-release mixtape Before the ‘Party on Black Friday’.

In addition, he took to Instagram last week to tease several of his impending tracks from Royalty, one of which appears to be aimed at  Karrueche.

In one now-deleted clip, the ‘Loyal’ singer can be seen mouthing along to lyrics, “I remember when we used to be in love / Now you’re in Hollywood, tryna get your name up / Now when I look at you, all I see is a stranger,” prompting Tran to respond to Brown’s apparent diss with her own video asking, “To be petty… or to not be petty? That is the question.”