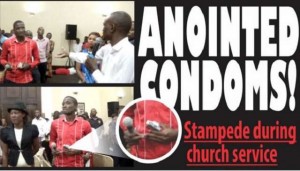 A man of God in Kenya, Pastor Paul Sanyangore, has caused another stir in the country after he blessed condoms for his church members during a service, reports Nehanda Radio. According to the reports, there was almost a stampede as church members, both married and singles, rushed to get the anointed condoms from the Pastor who is regarded as one of the most controversial in the East African country.

Justifying his actions, Pastor Sanyangore was said to have told reporters that a woman brought the condoms for him to anoint so she could use with her husband who had abandoned her for two years and only went back to her few days earlier.

“I prophesied to a certain woman that her husband would return two years after his mysterious disappearance. I am not sure but during the week, the husband called her telling her he would come back home.

She came to church and during prayer time, she took the condoms out and handed them to my assistant asking if they were okay to use when her husband returns.

I saw nothing wrong in her using them with her husband after two years of absence. Who knows what he was doing there so it is better to be safe. When I prayed for the condoms, some women came out and wanted to have them.”

There’s only one explanation for this event –  end time!