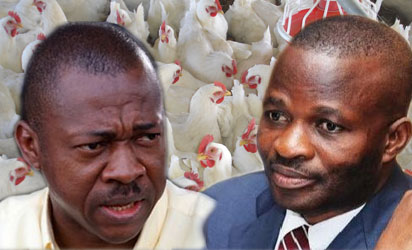 An Enugu High Court on Friday nullified the impeachment of a former Deputy Governor of the Enugu State, Sunday Onyebuchi, by the State House of Assembly.

Mr. Onyebuchi, a deputy to former Gov. Sullivan Chime, was impeached on Aug. 26, 2014, and replaced by Rev. Ifeanyi Nwoye.

According to the then State Assembly led by the Speaker, Eugene Odoh, the former Deputy Governor was impeached based on allegation of gross misconduct arising from operating a poultry in his official residence and alleged refusal to represent his former boss at two official functions within and outside Enugu.

But in a judgment of the court delivered on Friday by Justice R. Odugu, the impeachment of Mr. Onyebuchi was declared “null and void”.

The judge ordered the reinstatement of the former governor’s rights and benefits from the time of his removal from office to the period his tenure elapsed.

He declared as unconstitutional, null and void the nomination of Mr. Nwoye as replacement of the plaintiff.

He held that the plaintiff’s impeachment did not comply with the provision of Section 188 of the 1999 Constitution as amended.

“Operating poultry does not in any way constitute gross misconduct in the performance of the functions of the plaintiff’s office as envisaged by the constitution.

“The alleged refusal of the deputy governor to attend two public functions assigned to him by the governor also cannot amount to gross misconduct.

“Only a grave violation or breach of the constitution can be regarded as a gross misconduct.

“Section 188 (11) of the 1999 Constitution as amended is not a weapon for the House of Assembly to police the duty of the deputy governor or to hound him out of office.

“Besides, the plaintiff has told the court that the only constitutional duty assigned to him by the governor was the chairmanship of the boundary adjustment commission.’’

The judge held that the state assembly violated its constitutional duties by the impeachment of the deputy governor as there was no basis for it.

He also berated two defendants in the suit – the House of assembly and Mr. Nwoye — for their failure to appear in court or send legal representation to defend their actions.

He said the copy of the purported resolution of the impeachment panel was not presented before the court.

In a reaction shortly after the judgment was delivered, Mr. Onyebuchi, who was in court with his wife, said that he had been vindicated.

He also said he had forgiven all those who offended him.

“Some of them have come to confess and plead for forgiveness, saying that they were used and I have forgiven them and even those who haven’t come to me”, Onyebuchi said. “The God I serve is God of forgiveness and therefore I hold nothing against them”.

The News Agency of Nigeria (NAN) reports there was no representation from the defendants in court to get their reactions.