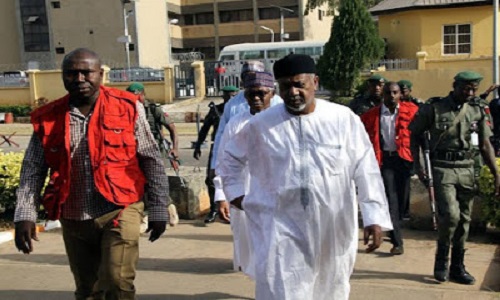 The Board of Trustees (BoT) of the Peoples Democratic Party (PDP) has thrown its weight behind President Muhammadu Buhari’s ongoing anti-corruption campaign.

The PDP BoT Secretary, Senator Walid Jibrin, who made this known while speaking with reporters at the party’s secretariat in Abuja on Friday, said the party would support any leader who is ready to rid the nation of corruption.

According to the BoT scribe, the PDP would support every legal measure put in place to recover funds from those who looted the treasury, adding however that the process must respect the rule of law.

“The BoT of the PDP does not condone corruption in any form. Anyone found guilty should be dealt with according to the laws of the land. We are in support of any leader who is ready to rid the country of corruption”, Jibrin said.

He, however, cautioned against what he described as stigmatization of the PDP as a party of corrupt people and selective prosecution of the anti-graft war.

“It is wrong for anyone to say everybody in PDP is corrupt. Corrupt people are everywhere in the country. They are in every sector of the national economy and their activities have given Nigeria a negative image in the eyes of the international community.

“So it is the duty of every Nigerian to support the fight against corruption. But due process must be followed, in line with the laws of the land”, Jibrin added.