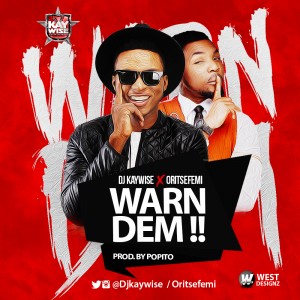 Ever since the release of his single “Hangover” featuring Yung6ix, Dammy Krane and Jazzy in 2012 , Dj Kaywise has been unstoppable. The super talented Dj drops his second song of the year titled “warn dem” featuring Oritsefemi and produced by Popito. The title sounds a little like DJ Spinall’s “Pepper Dem”.