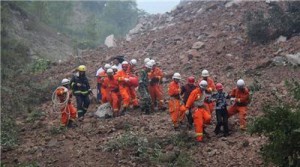 A landslide at an industrial park in southern China buried more than 20 buildings and left 27 people missing on Sunday, state media reported, as more than 1,500 emergency workers searched the scene.

Rescuers pulled four people from the debris after the mudslide in the southern city of Shenzhen in the province of Guangdong bordering Hong Kong, the official Xinhua news agency reported. It said three of the victims suffered slight injuries while the fourth was unhurt.

It was unclear whether there had been any fatalities and Xinhua did not elaborate on the 27 people it said were missing. Earlier in the day the agency reported 41 missing. About 900 people were reportedly moved out of harm’s way before the landslide struck late in the morning, according to the Shenzhen Evening News newspaper.

The area has been a large construction site for more than two years. Soil that had been excavated and stored on a hill turned into mud after heavy rain, causing the landslide.