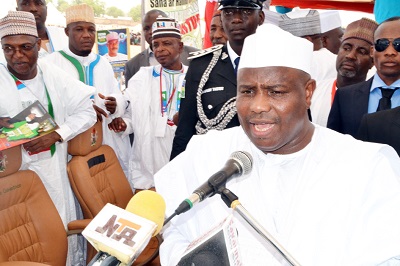 Governor Aminu Waziri Tambuwal of Sokoto State on Wednesday called on state governors to diversify their revenue base, saying it was the only way to survive and ensure meaningful future in view of current economic realities in the country.

Speaking at a two-day retreat organised for political office holders and senior government officials from the state in Kaduna State, the former House of Representatives Speaker said though states now face financial challenges, looking inwards and away from federal allocation was key to a secured future.

“The public service today faces challenges which we may not have been taught while we were in school. With the advent of the social media and citizen awareness, it has become imperative for us to run the affairs of government in the most transparent manner”, he said.

Mr. Tambuwal added that as societies evolve, governments must also evolve new ways to deliver quality service and urged participants at the retreat to reduce rancour and promote cooperation for the smooth running of government.

“We envisage that deliberations and brainstorming sessions at this retreat will have far-reaching impact in evolving policies and programmes that will guide us to address the yearnings and aspirations of the electorate who gave us their mandate with the hope that we will ensure good governance”, he said.

Gov. Tambuwal added that friction among government officials, irrespective of whatever arm or tier they belong to, would only be possible if they resort to personal or selfish indulgence as against genuine commitment to public interests.

“Roles and functions have been clearly streamlined and procedures sufficiently articulated and de-lineated. I strongly believe that ambiguities are only created if, and only if, public need is sacrificed on the altar of vested interest”, he said.