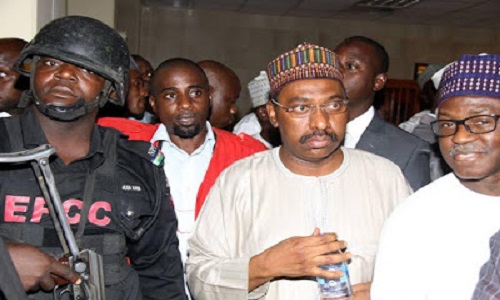 The MD told the EFCC that his firm had a $170million contract with the Office of the National Security Adviser (ONSA) to supply some vehicles.

It was learnt that the EFCC was exploring the angle that the N1.275billion payment was at the instance of the ONSA for political purposes.

According to a top source in the anti-graft agency, Singh was invited as part of the ongoing probe of some companies used for slush funds for the 2015 general election.

It was learnt that although the MD visited the Abuja headquarters of the EFCC on Wednesday, he merely underwent profiling.

But when he returned yesterday, he was quizzed Singh for about 10 hours (from 10am to 8.22pm).

Stallion Group is owned by the Vaswani brothers.

An EFCC source told The Nation that Mr. Singh was invited to assist investigators based on findings they made in the course of ongoing investigations into the $2.2 billion arms deal scandal currently rocking the ONSA.

The source said: “Stallion’s name cropped up when investigators scrutinizing transactions carried out by the former NSA with Jabbama Company, a bureau de change operator, stumbled on evidence that Stallion Group also paid N1.375billion to the company though N100million of the money was later returned, leaving a balance of N1.275billion.

“Investigation further revealed that Jabbama converted the money into United States Dollars ($114,750,000) and handed it to Ambassador Bashir Yuguda, former Minister of State for Finance who is already being prosecuted on multiple charges of fraud and money laundering.

“Yuguda was said to have explained to EFCC interrogators that, the N1.175billion received from the Stallion Group was at the instance of former NSA, Dasuki, for political purposes”.

Responding to a question, the EFCC source said Singh had made substantial revelations on the ongoing probe, revealing that “In the statement that he volunteered to interrogators, Singh Claims his company has a $170million contract with the ONSA to supply some vehicles and that, he had already supplied the first batch of Fifty vehicles since November 2014 for which he was yet to be paid.

“Additionally, he confessed that the money he gave to Yuguda was at the request of both Dasuki and Yuguda, to support their party.

“Detectives at the EFCC are left wondering why a corporate organisation will, instead of making donation to any political cause through the relevant political parties, route the fund through the NSA.

“They are also wondering whether the money was an inducement for a contract awarded to the company by the NSA”.

It would be recalled that in his Statement of Witness to EFCC, Yuguda, who admitted that he liaised with Stallion Limited, gave the details of other disbursements.

“When the account was in credit, disbursement was made from time to time on the instruction of the then NSA. Part in foreign exchange or transfers”, the ex-Minister said.