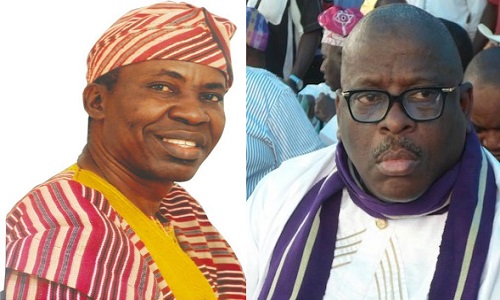 The immediate-past Senator, who represented Ogun East Senatorial District in the National Assembly, Senator Gbenga Kaka and his successor, Senator Buruji Kashamu, yesterday, engaged in a verbal war over ownership of constituency projects in the area.

While Senator Kaka accused Kashamu of allegedly claiming to have facilitated constituency projects he knew nothing about, the incumbent described the allegation as funny, explaining that government is a continuum and that his predecessor influenced the inclusion of some projects in the budget because he was a senator.

Kaka was reacting to a statement credited to Senator Kashamu during a reception held in his honour by members of the Peoples Democratic Party, PDP, in the state in Ijebu Igbo, penultimate Saturday.

But Kaka, while fielding questions from journalists after he inspected some of the projects he had embarked on, yesterday, described it as unthinkable that Senator Kashamu would go to the extent of erecting sign boards at the sites of the two projects, claiming to have facilitated the construction of the project in the areas.

Kaka said although he bore no ill-feelings towards Kashamu, he had to set the records straight, having facilitated and executed close to 60 major projects in his constituency in his four-year tenure.