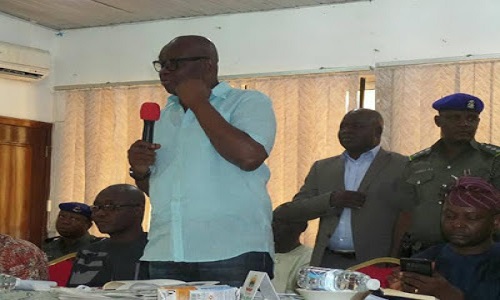 Governor Fayose lifted the three-month suspension he slammed on Mrs. Alade for alleged incompetence on Saturday at the palace of the Ewi of Ado Ekiti, Oba Adeyemo Adejugbe, during the celebration of the monarch’s 25th coronation anniversary.

Recall that the governor after suspending Mrs. Alade “for only three months”, directed the State Head of Service, Dr Olugbenga Faseluka to oversee her office pending her resumption.

Mr. Fayose, who lifted the suspension order in response to a request by Oba Adejugbe, said he was caught unawares but he had no option than to grant the request made by the monarch on behalf of Mrs. Alade.

The monarch had while making his speech at the coronation anniversary, pleaded on behalf of the suspended SSG, urging the governor to restore her back to office.

“What you asked took me by surprise, this is what I will term an ex-parte order. You have tied my hands and you did not give me any leeway. I defer to you and I defer to our fathers who are here. I have no option than to pardon her. She can resume office on Monday”, Fayose said.