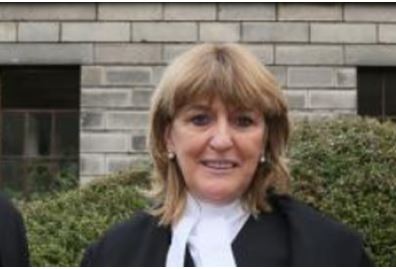 A female judge was savagely beaten by a man who disagreed with her ruling today.

Justice Miriam Walsh was battered in a prolonged attack before Irish police restrained and arrested the thug.

She was relentlessly punched in the face until security and Garda officers managed to restrain him.

The incident occurred at around 1pm at a family law court sitting at Dolphin’s House in Temple Bar, Dublin.

Justice Walsh was taken to hospital by ambulance but has been released, the Irish Mirror reports.

It’s believed the judge was attacked by a man who was giving evidence in a case.

A spokesman for the Court Service confirmed the assault.

He said: “Security systems are in place and were operational. This allowed the gardai to intervene and make an arrest.

“The judge’s injuries are not believed to be serious. She has been discharged from hospital.”

Sources told how the judge was left helpless as the thug repeatedly beat her.

They added: “Tensions got high after the decision was made and he jumped from the dock at her.

“He also kicked and punched the court registrar who also needed treatment. “The judge was trying to defend herself from him but he was repeatedly hitting her in the face. “She was in a terrible state. She had to be stretchered off to hospital. “It would seem she suffered a broken nose and serious face lacerations.

“There was a lot of blood and she also received a number of cuts to her face. “It is believed the numbers of court gardai stationed at Dolphin House had been recently cut. Instead of five there are now only two.

It is believed the attacker was calm throughout the proceeding until Justice Walsh made her ruling.

“There are systems in place for incidents like these but questions will be asked as to why nothing was done sooner.”

“Judges are impartial decision-makers whose work is driven by the pursuit of justice for all members of society. “The physical attack on Judge Walsh is an affront to justice. It is a new low and one I hope will never be repeated. “There must be a thorough investigation into the circumstances under which Judge Walsh could be attacked in this deplorable way.”