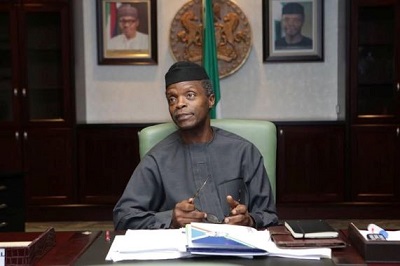 Vice President Yemi Osinbajo on Thursday said that one of the cardinal objectives of the All Progressives Congress-led Federal Government’s “change agenda” was to create Information Communication Technology hubs across the country.

The vice president made this known during the signing of a Memorandum of Understanding on “ICT for Change Empowerment Programme” between the Federal Government and Huawei Technologies Co. Nig Ltd, at the State House, Abuja.

“We are looking at developing existing hubs and to see how we can empower those who are already working in the various ICT hubs”, Osinbajo said.

According to him, some of the ICT organisations were already growing into a silicon valley in Yaba, Lagos, and many people are engaged in programming and developing applications.

Prof. Osinbajo disclosed that the Federal Government would expand the scope of technology and incubate the start-ups of young people to advance ICT even as he noted that the development of ICT was an opportunity for people to get quick and decent jobs to enhance their lives and the economy.

He also commended the group for the partnership with the government, assuring that the government would work with it to achieve success.

The vice president said that the government was creating an opportunity to ease business for entrepreneurs, adding that the country must move up in the business index by opening up the market.

He further stated that the Federal Government would encourage not only the selling of products, but also their local manufacture so that the large population in the country could occupy the middle class.

The vice president stressed that it the MoU provided an opportunity for China to improve on its technology transfer, being a strategic partner with the Federal Government and that the effort would lead to greater prosperity for both countries.

Osinbajo hailed the ladies who qualified to go to China for ICT training, saying that it was the objective of the administration to advance the girl-child education and women in business because of their large population.

“If you don’t engage women in business and education, we will be shooting ourselves in the feet as women have a very great role to play in nation building.

“Chinese Ambassador has proved to us that he is not only an ambassador but a brother, because he has stuck to us very closely and has taken every opportunity to work with Nigerian government to achieve our objective”, he said.

While commending Huawei technologies for the manner it was advancing technology development globally, the vice president remarked that knowledge was key “and only the knowledgeable society will succeed”.

Vice President Osinbajo said he was excited about “certain attitude the young generation has about technology”, adding that it was time for young people to be trained to imbibe ICT and the entire technology field.

Earlier, Minister of Communications, Barr. Adebayo Shittu, said that the trainees would be evenly selected and urged Huawei group to increase the number of Nigerian trainers for the project to save cost of sending trainees to China.

Similarly, the Labour and Employment Minister, Dr. Chris Ngige, said that the Chinese had blazed the trail in advancing technology in Nigeria.

Ngige described China as “friends in prosperity and friends in poverty”, as both countries were eager to lift the unemployed out of poverty.

Mr. Ngige pointed out that the MOU would create jobs in line with government’s objectives and requested that the number of trainees be increased to accommodate more youth.

On his part, Chinese Ambassador to Nigeria, Gu Xiaojie, said that based on existing cordial relations between China and Nigeria, his country would be part of the change agenda in Nigeria.

Towards this end, Mr. Xiaojie said that his country was ready to develop the economic cooperation with Nigeria through 10 key cooperation plans, including industrialization, agriculture, infrastructure, financial services, rail development and public health.