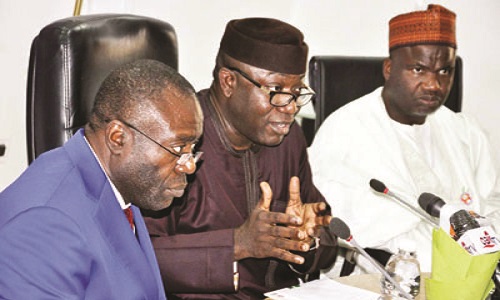 He gave the indication yesterday while reeling out his plans at the ministry’s maiden press conference in Abuja.

Nigeria has 44 mineral assets, including precious minerals, which, Fayemi said, could make the sector a key source of economic growth and diversified revenue base for Nigeria.

He also gave all mining licensees till March 1, 2016 to use their licences or lose them.

Fayemi, who said he was projecting about one million direct jobs from solid minerals, stressed that the administration of President Muhammadu Buhari was committed to the revival of the Ajaokuta Steel Complex (ASC).

He said: “Today, we have at least 44 known mineral assets that include precious minerals, base metals, bulk minerals and what are known as rare earth minerals.

“We have reasons to believe that available data of our reserves understates what the almighty God has blessed our country with many cases. We have barely updated some of the geosciences data collected 50 years ago or earlier. So, we are cautiously optimistic that our mining endowments actually exceed what is currently stated.

“That said, based on current data, Nigeria’s solid minerals sector makes up about 0.34 per cent of Gross Domestic Product (GDP). That means based on current official exchange rates, the mining sector contributes N400 billion in value to the economy.

“While that is a significant role, it is smaller than its true potential as the vast majority of our mining assets are yet to be exploited. In fact, what has been happening is that the sector has more or less been operating sharply below capacity, with many mining operations manned by small-scale artisanal miners, as opposed to the large-scale players”.

The Minister pledged to sanitise the solid minerals sector by triggering the ‘use it or lose it’ clause enshrined in the Minerals and Mining Act, 2007.

“We will work with stakeholders to review existing licenses and bring them up to date where there are issues. Our goal is to get licensees, who are sitting on the fence to have sufficient confidence to start investing real capital.

“That said, starting March 1, 2016, we will start enforcing the ‘use it or lose it’ doctrine enshrined in the Nigerian Minerals and Mining Act, 2007. The period from today to March 1, 2016, should be considered an amnesty period to allow regularisation of papers”, he said.

Responding to a question, Fayemi said all things being equal, the solid minerals sector could create about one million jobs.

He explained: “I can tell you that the solid minerals sector is one that can provide at least a million direct jobs and much more than that in indirect jobs with people working in the mines and associated sectors like construction. We know that we can do it, but we need to formalise the jobs and we need to ensure that we bring them into the economy so that it can serve our nation better.

“We have commenced discussions with the World Bank once again and the bank is desirous of supporting the sector. We need to be ready, we ought to show commitment ourselves as a government and that way, it will be easier for us to receive support from a whole range of players.

“If we deliver on this vision, then we can build a mining sector that Nigerians can be proud of in 30 years or more from now. This sector should deliver double digit growth over the next decade, with important direct and indirect economic impacts on households.

“We will focus on supporting and growing Nigeria’s position in mineral assets with commercially proven reserves. Our assets will then be used to serve two key markets: a domestic industrialisation market that is more beneficiation focused and an export market that is more focused initially on the export of ores and raw materials.

“The mix of investors that will target Nigeria will reflect that preference of serving both the domestic and export markets. We anticipate that as we expand our geosciences databases and insights, we will also expand what minerals we compete in”.

Fayemi also said the Ajaokuta Steel Complex was not privatized, but was put under concession in 2005 for a decade.

He explained that it was revocation of the concession agreement in 2008 that led to the lingering legal issue facing the steel complex.

“But I can assure you that this is a matter that Mr. President insists on and I am reasonably confident that before the end of the first quarter of 2016, we would have a direction as to whether we are taking it over and running it ourselves or resolving the legal issues involved and allowing this to determine who gets to run Ajaokuta.

“I was in Ajaokuta last week and we were so distraught by the time we left, that how could a nation do this to itself? Ajaokuta in itself is a city; it has an airport, seaport and 60 kilometres of internal rail. It has a rail from Ajaokuta almost to Warri and another linking it to Itakpe 60 kilometres. How do you invest this amount of resources and then you walk away from it?

“It is unacceptable to any sane human being and that is why for us, we just have to fix Ajaokuta. Unfortunately, the figures being quoted for fixing it is not a figure that the Nigerian state can come by easily.

“We have to figure out a creative and innovative way of ensuring that we partner with people who can make it happen so that we begin to deliver liquid steel and its products to our country”, he said.