FINALLY!!! Denrele Comes Out As Gay?!? + Hangs Out With Shirtless Guy Inside Bathroom [Photo] 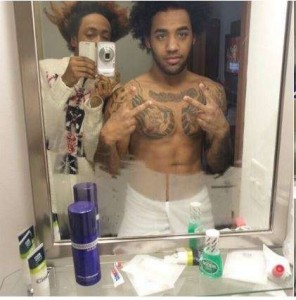 Controversial Nigerian OAP, Denrele Edun has always been marked with rumors that he is gay.

Well, this photo is only going to further push that rumor, and also the tweet he sent out with the photo.

Has Denrele finally come out of the closet?!?

The outspoken OAP tweeted a picture of him and an unidentified man in a bathroom, the unknown guy is only wearing a towel.

Denrele and his ‘friend’ posed together severally in the bathroom and his words in the tweet seems to be direct enough to say he’s gay.
“That moment when the Side Chick is not a Chick!#TheMorningAfter #TransTuesday into #WednesdayWant” tweeted the former SoundCity presenter.
Well, we shouldn’t really be surprised with Denrele’s latest antic as he has always called himself a sexual outlaw and has stated severally that he is not homosexual.
Share
Facebook
Twitter
WhatsApp
Previous articleOMG!!! Actress Genevieve Nnaji Gets Marriage Proposal | PHOTOS
Next articleDSS Drops Charges Against Biafra Leader Nnamdi Kanu In Magistrate Court
- Advertisement -Ad ==> Discover how a young Nigerian graduate now makes a consistent 40k per week doing a legitimate online business. You too can start yours now, click here!!!