Ghana has been ranked as the second most corrupt African nation behind South Africa which is the most corrupt of the entire continent. 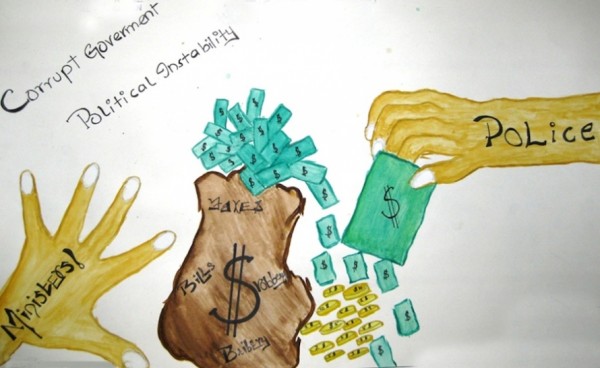 For the first time, people reported business executives as highly corrupt. Business ranked as having the second highest levels of corruption in the region, just below the police.

According to a report by Transparency International, about 71 percent of people living in Ghana say corruption has increased over the last twelve months.

A new opinion poll showed that most governments across Africa are failing in their duty to stop the abuse of power, bribery and secret deals.

According to a report put together by Transparency International and Afrobarometer, majority of the African governments are doing really badly in the fight against corruption.

In the Africa Survey 2015 which forms part of the global corruption barometer, 43,143 respondents were spoken to across 28 countries in Sub-Saharan Africa between March 2014 and September 2015.

They were asked their experiences and perceptions of corruption in their country.

About 58 percent of Africans in the surveyed countries, say corruption has increased over the past 12 months.

In 18 out of 28 countries surveyed a large majority of people said their government is doing badly at fighting the menace.

Bribery was a key point in the survey,the debt to which bribery has eaten deep into the fabrics of the continent calls for concern.

Of the six key public services that was asked about, people who come into contact with the courts and police are the most likely to have paid a bribe.

According to the report,  poor people across the continent, who use public services are twice as likely as rich people to have paid a bribe, and in urban areas they are even more likely to pay bribes.

The survey showed that 22 percent of people that have come into contact with a public service in the past 12 months said they paid a bribe.

Police regularly rate as highly corrupt, however, there was a strongly negative assessment of business executives.

These facts gave a new dimension to the issue of corruption  in the continent, compared to previous surveys.

“We also call on the people to demand honesty and transparency, and mobilize against corruption. It is time to say enough and unmask the corrupt,” chairman added.

Despite all disappointing findings, there were still bright spots across the continent and those were in Botswana, Burkina Faso, Lesotho and Senegal.

The survey disclosed that citizens in these countries were some of the most positive in the region regarding the issues of corrupt practices in their various nations.