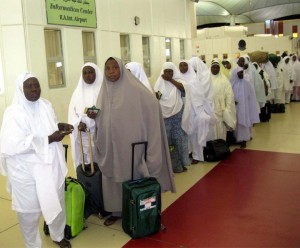 It has been several weeks since the conclusion of the 2015 Hajj exercise where at least 2,431 people died due to stampede in Mina, Saudi Arabia, but 43 Nigerians are still missing.

This was contained in a report submitted, yesterday, to the Secretary to the Government of the Federation, David Babachir Lawal, by the committee on the 2015 Hajj exercise.

Chairman of the committee, Abdullahi Mohammed, described the exercise as the most eventful in the history of hajj operations in Nigeria with pilgrims witnessing two tragic events, the crane incident at the Grand Mosque in Makkah on September 11 and the stampede in Mina on September 24.

His report indicated that Nigeria recorded a total of 280 deaths from both events, while 43 are considered missing as their status is yet to be ascertained.

A total of 75,081 Nigerian pilgrims participated in the 2015 hajj exercise.

Receiving the report, Lawal commended the chairman and the entire board of the National Hajj Commission of Nigeria for their performance in Saudi Arabia, especially, during the tragedies at the hajj.

He said he was particularly impressed with the conduct of the chairman in providing the government and indeed, the general public, adequate and incontrovertible information throughout the crisis. He assured the commission that the report will receive the attention of the government.