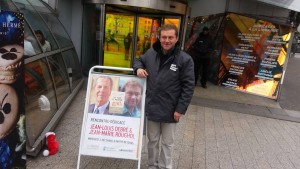 After being homeless for nearly three decades, Jean-Marie Roughol’s life is about to change for the better. The 47-year-old’s memoirs about begging on the streets of Paris has become a national bestseller this holiday season, selling nearly 50,000 copies and earning him cult status. Oddity Central has more:

The 176-page book, titled Je tape la manche: Une vie dans la rue (My Life as a Panhandler: A Life on the Streets), tells Roughol’s story from his rough childhood to winding up on the streets of Paris. He recalls how he was abandoned by his mother and brought up by an alcoholic father, ending up on the streets in his early twenties after losing his job as a waiter.

Roughol started writing the book two years ago, sitting on park benches, making notes in school exercise books. He got help with writing and editing from a long-time friend, former French Minister of Interior, Jean-Louis Debré. The two met many years ago when Roughol offered to look after Debre’s bicycle as he shopped on the Champs-Élysées, a sweet tale that is also included in the book. He compares meeting Debré to winning the lottery.

Debré was the one who challenged Jean Marie Roughol to write his book, after overhearing two passers by whispering to each other “did you see that, Debré is talking to a bum”. Shocked by their reaction, he told his homeless friend that he could show those pretentious and infatuated people the error of their judgement by writing a book about his life.

Roughol told French reporters that he was afraid to put words to paper at first, because he thought pretty low of himself. He could only think of his faults, and the fact that he hadn’t frequented school too much as a child didn’t really serve as a motivation to write a book. But in the end, he decided to do it. The two would meet at cafés, where Roughol would hand Debré his notes, and he would transcribe them into a computer.