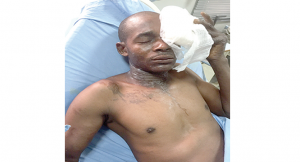 Hoodlums in Lagos yesterday attacked men of the state Task Force on Environment and Special Offence Unit. It was gathered that the hoodlums chased the officers in a commercial Volkswagen bus otherwise called Danfo on Oshodi-Oke and poured acid on a paramilitary official attached to the task force, Mr Akude Silas.

This was as the task force arrested more than 64 miscreants at Oko Mala, Oshodi. The miscreants, it was learnt, were those terrorising Oshodi and its environs. Silas and other officers were on enforcement operation to dislodge street traders around Oshodi area to ensure free flow of traffic before they were attacked.  The victim was rushed to the Lagos State Emergency Centre, Toll-Gate before he was later transferred to the General Hospital, Ikeja. Speaking with our correspondent after a visit to the Emergency Ward of the Ikeja General Hospital, the task force Chairman, Superintendent of Police (SP) Olubukola Abe, described the attack as barbaric and affront on his men.

Abe disclosed that while Silas was currently receiving treatment at Emergency Ward at the hospital a Police Sergeant, Robert Ajayi, was also injured by some people believed to be from Niger Republic at Ojo area.
The chairman said Ajayi was part of the security team that supported a government ministry during the removal of shanties constructed on an open field at Ojo Junior/Senior Secondary School, Ojo, Lagos. He said his men and task force vehicles were subject of attacks in recent times at different locations across the state.