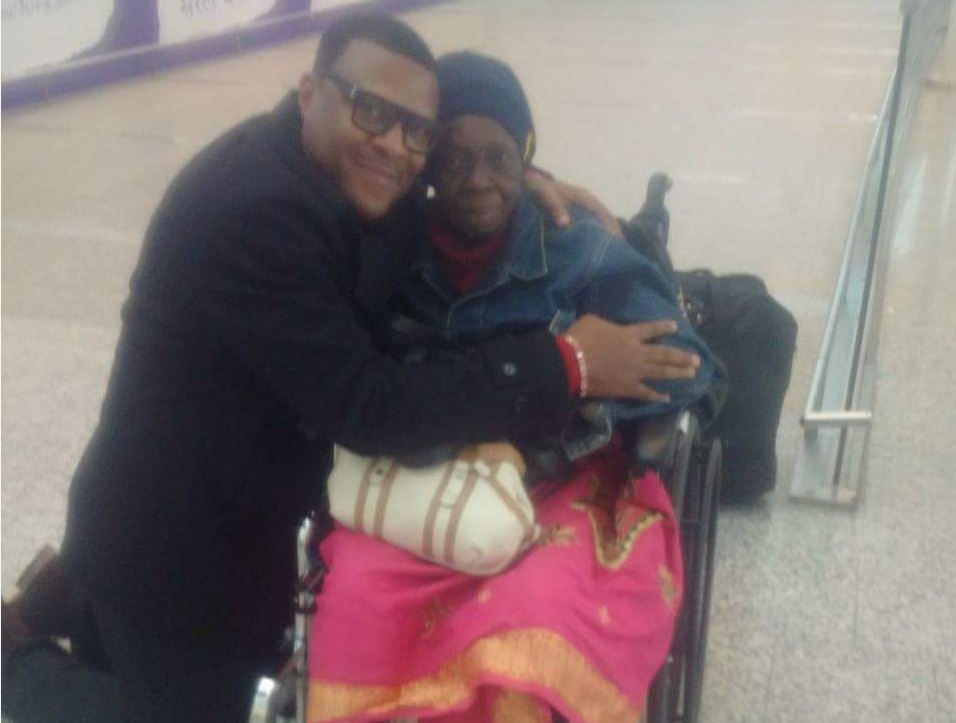 On a sub zero freezing but bright and sunny late morning in Toronto, I gained an Adopted Mum. So there I was patiently awaiting my turn to go through immigrations with the Toronto Border force, and within earshot, I heard a rather fraught and somewhat distressing conversation between a stern border force immigration official…and a wheel chair bound grandma…near enough same age as my mum. She obviously didn’t speak much in terms of English, but I could tell from her pidgin English that she is Delta State, possibly Urhobo. The immigration officer was asking her who she came to see and how long for…she couldn’t understand a word. The immigration officer was at this stage getting rather impatient and started raising her voice at which point the poor lady started crying. So being the only Nigerian around, I stepped up and politely told the officials that I speak the same language as the lady. Quite quickly, the lady looked at me and said my son, and started rapping Urhobo splattered with pidgin English. Although I told her I wasn’t Urhobo but I can converse in pidgin quite well. And that if we cannot make any headway, I’d call a few close friends that are Urhobo. To cut a long story short, the immigration officials were. Categorical that if they couldn’t locate the relative that invited her, they ‘d have to send her back. The poor lady broke into an Asthma Crisis upon hearing “deport”. Apparently her daughter who has been in Canada for a decade invited her and before Mama left Nigeria, She (daughter) gave her all her contact details. Already vin a terribly distressed state, grandma had misplaced the details. Speaking pidgin ti her, I asked if she has a cellphone, otherwise called ” handset”, that I can look at to get her daughter’s contact details. She promptly produced her phone and guess what? The phone turned out to be one of the very old style Nokia Phone. As I was scrolling through the phone and trying to locate Charity, her daughter’s number, as if we didn’t have enough stuffs to del with. The phone’s battery tripped off on us! I opened it up so that I could swap the sim card into one if mine, only to discover it was indeed one old style full size SIMS which obviously couldn’t fit into mine. By this time, I had spent an additional hour and a quarter trying to assist. One thing was paramount in my mind, to do all that was humanly possible to avoid her being sent back from the hell hole she just escaped from. LOL still visibly distressed, I got phone out and called a close friend who lives in Nigeria. He happens to be from Urhobo and speaks the dialect perfectly. The woman eyes lit up when she heard a familiar dialect down the line telling her to calm down that all is going to be well. That that man is going to sort it all out. LOL. Whilst all these was going on, I started going through her hand luggage meticulously and methodically. After about 45 minutes, I hit the jackpot, and a presto. There all crumpled was Charity, her daughter’s contact details! Promptly dialled her number and a rather apprehensive voice came through. It was Charity – Mama’s daughter, whom she hadn’t seen in 10 years. Tears were flowing all around, Mama insisted that I should come for her to pray for me. Right there in the arrival hall, I knelt down next to the wheelchair and she prayed and prayed. Thus she did without minding the hordes if Canadians walking past, wondering what the heck is going on in the middle of the arrival hall. To cap it all, I gave Mama a parting gift and told the daughter who was apparently gobsmacked, dumbfounded and extremely emotional, that I have a mum of a similar age, who also quite often travels wheelchair bound. In all these I would want to think that should my mum par adventure find herself in a similar situation in future, a similarly kind hearted human being would step in and intercede.

Although it took at least 2.5 hours out of what is a hectic schedule for me, I couldn’t possibly have walked away from Grandma. And of course mamas daughter insisted on taking a selfie of me with mama before I dashed off. By a stroke of coincidence, the friend who I called to calm mama, has a sister called…yup, you guessed it, Charity! What an eventful morning!