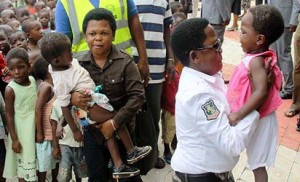 Famous comic Nollywood actors, Chinedu Ikedieze and Osita Iheme have revealed how they were once embarrassed abroad.

The duo, commonly called Aki and Pawpaw, said police in Italy had thought they were children, years back.

The two actors were in Italy with comedian Julius Agwu for a show, and had been picked up by the show’s promoter.

On their way to the hotel, policemen had stopped them at a checkpoint, and thinking they were children, threatened to arrest the promoter for not using baby carriers in the car.

After showing the police their passports however, they finally believed that they were actually adults with small bodies.

“I still remember that day and the feeling vividly…it was funny. Since then, Julius Agwu has been using the incident as joke in some events, but people don’t know that it’s a true life story,” Iheme said of the incident.