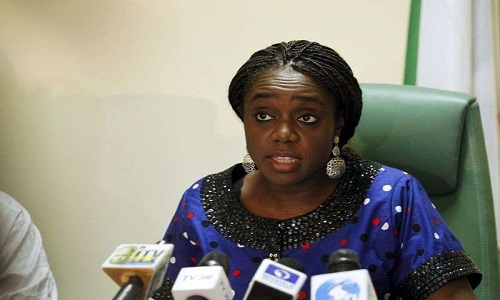 The Minister of Finance, Kemi Adeosun, has expressed optimism that the ministry under her watch can save Nigeria as much as $5 billion annually by blocking wastages in more than 450 government agencies, a strategy that will determine how well the Nigerian economy will cope under its slowest growth indices since 1999.

The minister gave the indication in response to concerns on how Africa’s top crude exporter plans to navigate a crash in oil prices that has bedeviled oil-producing countries globally.

Nigeria’s revenue has fallen by about 60% from the height of the oil boom more than a year ago, she said.

To compensate for the loss, the former Finance Commissioner in Ogun State said she would scrutinize the prices government agencies pay for plane tickets, office supplies and other items.

Next year’s budget will also include placing a cap on increases to government workers’ salaries, she said.

“We’re trying to rein everybody in”, Ms. Adeosun said. “I don’t expect anybody to like it, but I also expect people to understand that where we find ourselves, there’s no choice”.