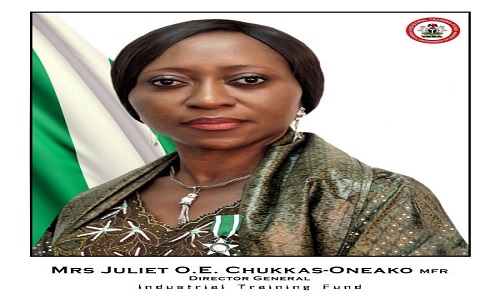 Speaking at a media roundtable in Abuja on Thursday, Chukkas-Onaeko described the accusation allegedly made by some members of staff of the organisation as “ridiculous and painful”.

She stated that those peddling the `falsehood’ should have known that it was impossible for her to sign off such huge amount of money without appropriation.

She said, “I am sure that when they wrote that thing they expected me to go and commit suicide or for the President to just shoot my head.

“If I were going to steal money to fund somebody’s campaign, where did they expect me to get it from? N700 million is not what you just sign off like that.

“The former Minister of Industry, Trade and Investment, Mr Olusegun Aganda, under whom I served, is a professional, not a politician.

“I don’t know of other chief executive officers under him, but nobody ever told me to bring money for campaign; PDP never asked me for any money”, Chukkas-Onaeko said.

She also dismissed the allegation that she transferred N1.2 billion to the Nigerian Employers Consultative Association (NECA) without due process.

She explained that the money was provided for in the agency’s 2014 budget to fund the ITF-NECA Technical Skills Development Programme (TSDP) launched in 2009.

“Every year, there is funding provided for it, which is in the budget and is approved by the National Assembly.

“By the time I came on board in 2014, they had already disbursed about 70 per cent of the money. That budget wasn’t drawn up by me.

“What I saw in the trend was that on a yearly basis, the money allocated for the programme was increased by between 10 and 20 per cent to reflect current economic realities.

“But, in the 2015 budget, which is the only one I have presided over, I refused to approve the increase.

“Instead, we increased the number of participating companies from below 10 at inception to the current 14 which is against the initial arrangement. I expected to be commended for that,’’ she said.

The director general said that she had stepped on many toes since she came on board by blocking the avenues through which they were making easy money from the agency.

One of such avenues, she disclosed, was the outrageous monthly rent of N9.5 million being paid by the agency on a property housing one of its offices before she assumed duty.

According to her, the landlord was forced to reduce it to N5 million monthly following her insistence that the rent was either renegotiated or the office be relocated to a cheaper accommodation.

“I think this is one of the ways I’m stepping on many toes, because people who are used to making easy money will definitely react when you attempt to block them.

“Corruption is something that when you fight it, it fights back even more aggressively and if you are not careful you end up being the corrupt one.

“That is the jacket that they have sewn, but I refuse to wear it. Anybody saying I’ve taken millions illegally should come and check, the system is open for them”.

Chukkas-Onaeko also debunked the workers’ allegation that she was insensitive to their welfare, saying that within her one year in office she had worked a lot on staff welfare.

She stated that staff salary was doubled, while the money set aside for staff loan was also increased from N250 million to N500 million.

According to her, the ITF is one of the first agencies to implement a Federal Government’s circular released in October 2014 on the increase of pensioners’ entitlements by 23 per cent.

She added that her administration was also able to pay a backlog of the increase spanning 63 months to the pensioners.

The director general said that the issue of training and retraining programmes was given utmost priority by the agency to update the knowledge and skills of its workforce. (NAN)