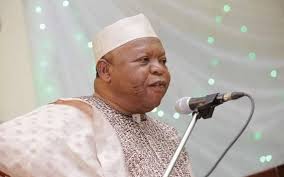 Founder of the Omega Fire and Miracles Ministries, Auchi, Edo State Apostle Johnson Suleman said he warned that the late All Progressives Congress (APC) governorship candidate, Prince Abubakar Audu, could die in the middle of election.

In an interview with Vanguard, the man of God who is known for his gift of prophecy said the latest thing he foretold was the death of the politician.

“I want to start with the latest, and that was the death of Abubakar Audu in the Kogi State election,” he said. “I was at a crusade in our Houston Texas branch on November 7, 2015, when God revealed to me that a popular politician in Nigeria could die in the middle of an election. I told the nation.”

Apostle Suleman also spoke about other things he had foretold.

“Then there was the event on September 20, 2015 when I said I saw that there was going to be fresh bombings in Borno and I asked Nigerians to go into prayer. Many had believed that with the coming of President Muhammadu Buhari to power, the Boko Haram bombings were going to stop but God said not yet.

“Also, on Sunday October 25, 2015, I told the world that I saw an aircraft of a foreign nation crashing with no casualty. That later happened to be Dynamic Airways which caught fire but no life was lost. All the events where these prophecies were announced were aired live on our ministry’s Celebration TV.

“On May 29, 2015, God spoke through me and I said it that the Buhari government would fight churches. Not long after, the Kaduna State governor, El-Rufai, shut down a church in Kaduna.

“This particular warning was repeated on August 28 and September 6, 2015. On June 26 and July 6, 2015, I foresaw fire outbreak and buildings collapse in Lagos, which came to pass. On that same June 26, I warned of an inferno at Onitsha market, which also came to pass, because people ignored these warnings and refused to seek God’s face over them. Also, I’m the first man of God that foresaw the demise of Chief (Mrs.) HID Awolowo. During the September Fire and Miracle Night, I did warn of the impending death of a prominent female figure that will touch the nation,” Apostle Suleman said.

The cleric also reminded Nigerians of his latest message.

“I recall, in March this year, I told the nation that in six months’ time, Nigerians would want to stone President Buhari. The manifestation is there now. Yes, the President means well, but then, Nigerians have suffered for too long and they have become so impatient they don’t need someone to preach to them about tomorrow. They want economic miracle to start happening right now, which is understandable. I warned in my prophecies of January 2015 that the Naira would go for 200 to one US dollar. The economy has remained unstable despite the change promises and high hopes. But I foresee that the incoming year is the year of reckoning for political thieves, leaders who looted the nation’s treasury. 2016 is the year they will be called to account for their deeds,” he said.

However, Apostle Suleman noted that not all prophecies happen. He explained: “According to the Bible, prophesying is to speak forth and to speak by the Spirit. These words might contain past, present and future events, instruction or warning. Depending on the type of message that comes forth; it may or may not be averted. That is left to God.

“The fact that a prophecy did not come to pass does not mean that the Spirit never said it. What may happen in that instance is that necessary steps were taken; prayer and fasting, to forestall negative occurrences. And whether we believe in the prophecy or not, it does not change the fact that God truly called the servant through whom He has spoken, neither does it make God who spoke through His servant a liar,” Apostle Suleman said.