If You Want Closure In Your Breakup, Do Not Do These 4 Things 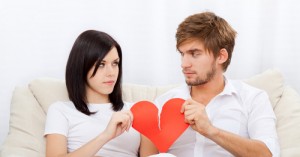 These behaviors won’t get you ANYWHERE.

Our quest to find the perfect match usually leads us through several relationships before we find “the one.”

Of course, our quest for that perfect match doesn’t just involve learning and self-discovery; unfortunately, it also involves handling the dreaded issue of how to break up.

The way you break up with someone reflects something about the relationship that you’re ending, as well as reflecting something about your personality. For most of us, our goal is to make a clean break without a lot of drama, but this isn’t always the result.

Here are four of the most common mistakes to avoid when it comes to breaking up.

1. Venting and blaming: Breaking up by listing all the rotten things that the other person has done during your relationship is a sure-fire way to end your relationship with an explosive argument. It doesn’t matter whether you expressed your dissatisfaction with your partner during the relationship or whether you left these things “unsaid;” either way, a break up isn’t the time to air these issues.

2. Taking a trip down memory lane: Despite your desire to make the breakup as pleasant as possible for him, there’s no need to go through a list of all the wonderful times you had together. Your focus is to move on, not to wallow in the past. The trip down memory lane just invites him to start begging, since he’s likely to point out that there can be many more good times ahead if you just give him one more chance.

3. Using clichés: We all know the typical break up clichés like “It’s not you, it’s me,” or “I don’t deserve someone like you.” His feelings won’t be spared merely because you used an old cliché. In fact, he may feel insulted when you sound like a character from a bad romance movie rather than speaking from your heart.

4. Tap dancing around the breakup: Some women try to break up by implying their desire to split rather than just coming out and saying it. You want to say it as delicately as possible, but your goal is still to communicate that this relationship is over. When you aren’t direct, you may find that he has no idea what you’re trying to tell him.

Now that you know what things to avoid, the key is to take the necessary steps to be sure that you don’t make these mistakes. Planning out what you’re going to say ahead of time is a much better approach than just going in and winging it. You should also give some thought to how you will respond to a variety of possible reactions from him, including anger, begging or maybe even crying.

When you’re planning out your words, remember that it’s safer to say less rather than more. Using fewer words means that there’s less chance of saying the wrong thing or sending him a mixed message. If you focus on being considerate and clear with your words, you should be able to keep the breakup drama to a minimum.