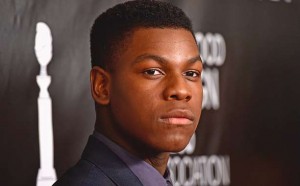 In a new interview with New York Times, the ‘Star Wars‘ actor said he was not fazed by the criticisms he got when the was unveiled as the first black Storm Trooper of the Star Wars franchise.

“It made me feel fine. I’m grounded in who I am, and I am a confident black man. A confident, Nigerian, black, chocolate man. I’m proud of my heritage, and no man can take that away from me” he told New York Times about the racism he faced from some fans of the epic sci-fi movie.

“I wasn’t raised to fear people with a difference of opinion. They are merely victims of a disease in their mind. To get into a serious dialogue with people who judge a person based on the melanin in their skin? They’re stupid, and I’m not going to lose sleep over people. The presale tickets have gone through the roof — their agenda has failed, miserably” he further said.
John Boyega also said he did not feel the urge to respond to the racist comments about his role in Star Wars.
He wondered why some people accept the crazy aliens in the movie, but rant about the skin colour of a human being.

In 2013, John Boyega starred in the movie ‘Half Of a Yellow Sun’ featuring fellow Nigerian actor Chiwetel Ejiofor and Thandie Newton.

The movie was about a love story set during the Biafra War.

‘Star Wars Episode VII – The Force Awakens‘ will be out on December 14.