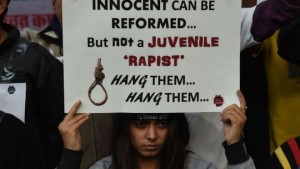 The Indian parliament has passed a bill which allows juveniles between 16 and 18 years of age to be tried as adults for serious crimes like rape or murder. At present, those under 18 can be sentenced to a maximum of three years in a reform facility.

The move to change the law gathered momentum after the youngest convict in the notorious 2012 Delhi gang rape was recently released from detention. The parents of the victim were among those campaigning to change the law.

On Tuesday, the Juvenile Justice Bill was passed by the Rajya Sabha – the upper house of the parliament. The bill was approved by the Lok Sabha – the lower house – in May.

It will now have to be signed by the president to become law – which, correspondents say, is a mere formality. The new law will not apply to the youngest 2012 rapist, but it will be used in future cases involving juvenile offenders above 16 years.