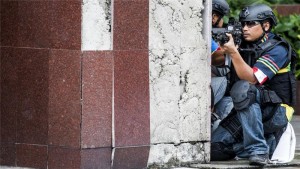 Indonesian counterterrorism police have carried out a series of raids and arrested at least seven people suspected of plotting attacks for the Islamic State of Iraq and the Levant (ISIL) group, local media reported The reports said the group planned to target Shia communities and Christmas and New Year celebrations.

The Jakarta Globe on Sunday said the police rounded up three suspects in Central Java and three in West Java, and seized bomb-making materials and manuals during the raids. A series of unrelated raids in East Java netted four suspected members of another “terrorist network”, the paper reported.

General Badrodin Haiti, the National Police chief, told the paper that the raids were prompted by intelligence from the US Federal Bureau of Investigations and the Australian Federal Police. “This terrorist network was preparing for bombing attacks in various locations in Indonesia. They are a mix of ISIL supporters,” Badrodin said. “Some are ISIL members and others are sympathisers.”