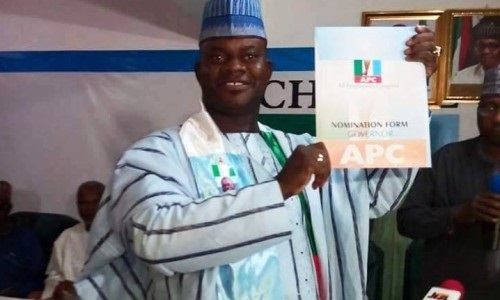 The Independent National Electoral Commission (INEC) yesterday confirmed that the All Progressives Congress had submitted Alhaji Yahaya Bello’s name as its governorship candidate for Saturday’s supplementary election in Kogi State.

Bello replaces the late Prince Abubakar Audu, who died before the conclusion of the election process.

The Deputy Director (Publicity) of INEC, Mr Nick Dazang said: “They have sent the name of their replacement candidate, the runner-up in their primaries that is Yahaya Bello, to the commission”.

Dazang also assured the people of Kogi State that the INEC is fully prepared to conduct both the Kogi Supplementary and Bayelsa governorship elections, which are both holding this Saturday.

According to him: “Commission is committed to conduct the two elections, that is why in respect of Kogi, in spite of what happened, we came out with public notice which invites the APC to submit its replacement candidate for the election”.

As part of the efforts to ensure a smooth poll in Bayelsa, Dazang said INEC will hold a stakeholders’ forum in the state today (Tuesday), adding that distribution of non-sensitive materials for the Bayelsa poll has already been concluded.

He disclosed that sensitive materials will be moved from Central Bank of Nigeria (CBN) for onward distribution for the Bayelsa election tomorrow.