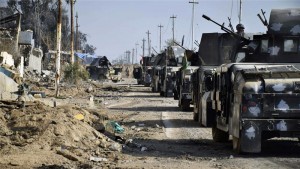 Iraq’s prime minister visited the city of Ramadi on Tuesday, a day after claiming its capture from the Islamic State of Iraq and the Levant (ISIL) after a months-long siege by the armed group. A source told Al Jazeera that ISIL fighters on the ground opened fire with small-arms on Haider al-Abadi’s helicopter, but were too far out of range to do any damage. Abadi arrived safe and sound with the province’s top military commander at the Anbar University complex in the city’s southern outskirts. Aljazeera reports:

Iraqi forces on Monday raised the national flag above the main government complex in Ramadi after days of deadly fighting against ISIL. But there were still pockets of resistance in and around the city, the army said. “The prime minister and the head of the armed forces Dr Haider al-Abadi visits the liberated city of Ramadi,” Abadi posted on his Twitter account.

As Abadi made his way to Ramadi his helicopter came under ground fire, Al Jazeera’s Osama bin Javaid reported from Erbil, Iraq.

“There were ISIL fighters present in the area who tried to attack … but they couldn’t really because it was out of range and they couldn’t do any damage. But it gives you an indication that this area where Iraqi forces are very jubilant about re-taking is not completely under their control yet.” Abadi congratulated the security forces who were still sweeping streets and buildings for roadside bombs, booby traps, and holed up fighters.

In a televised speech on Monday, Abadi heralded the military operation that freed the key city from ISIL’s control after the group took it over in May. “2016 will be the year of the big and final victory, when [ISIL’s] presence in Iraq will be terminated,” Abadi said. “We are coming to liberate Mosul and it will be the fatal and final blow to [ISIL].”