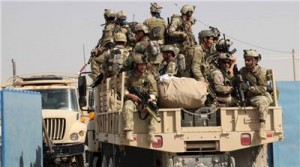 Iraq has said that any deployment of foreign troops on its soil cannot happen without approval of its government. The Iraqi prime minister’s comments came in response to the earlier announcement by Ashton Carter, US defence secretary, that the US will deploy “specialised” troops to Iraq to help fight the Islamic State of Iraq and the Levant (ISIL) group.

“We do not need foreign ground combat forces on Iraqi land,” Haider al-Abbadi said in a statement on Tuesday.  “The Iraqi government stresses that any military operation or the deployment of any foreign forces – special or not – in any place in Iraq cannot happen without its approval and coordination and full respect of Iraqi sovereignty.”

Speaking to the House Armed Services Committee, the Pentagon chief had said a “specialised expeditionary targeting force” was being deployed to help Iraqi and Kurdish Peshmerga forces. “In full coordination with the government of Iraq, we’re deploying a specialised expeditionary targeting force to assist Iraqi and Kurdish Peshmerga forces and to put even more pressure on ISIL,” Carter said on Tuesday.

“American special operators bring a unique suite of capabilities that make them force multipliers. They will help us garner valuable ground intelligence, further enhance our air campaign and, above all, enable local forces that can regain and then hold territory occupied by ISIL.” Carter said the special forces would also be able to intervene in Syria, where the US has already announced it is sending about 50 special operations troops.