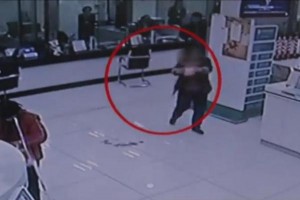 A dissatisfied customer at a Chinese bank was caught on camera spreading feces on counters and the floor of the facility.

Police said the 60-year-old woman had an argument with workers at the Agricultural Bank in Nanjing Dec. 8 about some suspected counterfeit currency and she returned to the business the following day with a pot filled with feces.

CCTV cameras at the bank recorded as the woman dumped excrement from the pot on the bank’s counters and floor.

The woman, whose money was later determined to have not been counterfeit, was sentenced to five days of administrative detention. Police did not specify whether the feces used by the woman came from a human or an animal.