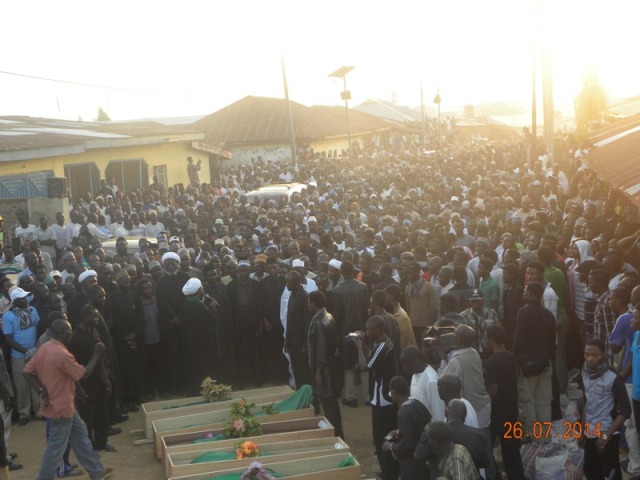 The Islamic Movement in Nigeria (IMIN) also known as Shiite has dismissed allegations of impunity and abuse of human rights leveled against it by some residents of Zaria.

According to the sect, those behind the allegations are a faceless and mischievous people who were out to blackmail the movement.

A group led by one Alhaji Mohammed Baba had at a press conference in Kaduna at the weekend accused the leader of the IMIN, El-Zakzaky, and his followers of impunity and human rights abuses in Gyallesu area of Zaria, allegations vehemently denied by the sect.

In a statement by its spokesman, Ibrahim Musa, the Islamic movement maintained that the allegations were a calculated scheme by the perpetrators of the brutal massacre of their members in Zaria to further their evil agenda in Nigeria.

“The faceless group referred to as ‘Zaria Residents’ has no identity and does not represent all the Nigerians resident in Zaria but the mischief of their sponsors to make such proclamation that made front pages in most Nigerian dailies.

“We wish to make it clear to all that Sheikh Ibrahim Zakzaky does not have a ‘sect’ as they claimed and he has said it on countless occasions that he does not belong to any sect.”

The statement disclosed further that El-Zakzaky “leads an Islamic movement that has millions of Nigerians that included both Shi’ah and Sunni Muslims with warmly association with various Christian groups in Nigeria.

“To buttress this, IMIN yearly commemorates the birth anniversary of Sheikh Uthman Ibn Fodio who was a great Islamic reformer in the West“African sub-region and a Sunni scholar and had spent millions of naira in the past 10 years producing a film on his life times which would be released soon.”

“The IMIN in the yearly AlQuds Day procession that draws attention to pathetic plight of oppressed Palestinian Muslims and Christians under inhuman Israeli occupation, where the overwhelming majority of Palestinian Muslims are Sunni, the IMIN had staged yearly peaceful rallies in their support for the past 30 years.

“These have proved beyond doubt that the IMIN under the leadership of Sheikh Zakzaky is not sectarian as these blind haters are trying to portray.

“Contrary to the purported lies by the faceless group, his Eminence Sheikh Ibrahim Zakzaky had lived with Gyallesu residents in Zaria happily despite attempts by security operatives to cause disharmony at various times.

“This is evident from the way he exchanged pleasantries and gifts during festivities as can be attested from the movement’s websites over the years. He hosted Eid feast with many from different places, including Christians in attendance.

“Members of IMIN have engaged in provision of free social services to the community, including water, sanitation and healthcare to neighborhood which had even extended to the Ahmadu Bello University Teaching Hospital, Shika near Zaria where the Movement catered for patients stranded by health workers strikes on various occasions hence, it is absolutely mischievous and ridiculous for anyone to claim that residents have been placed under bondage for 20 years,” the sect said.