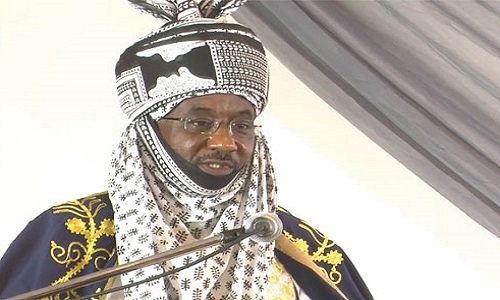 The Emir of Kano, Muhammad Sanusi II, has told a delegation of religious leaders that he used his personal money to rebuild a church that was destroyed during a religious unrest at Rogo local government area in Kano State earlier this year.

Sanusi II, said: “I renovated the said church to help avoid a situation where a Christian believer might feel offended and his religion disrespected”.

The emir stated this Friday during a one day Inter-Religious and Community Conference organised by Kano State government with the theme: “Towards Strengthening Interfaith and Community Relations for Harmony, Peace and Sustainable Development”, held at Coronation Hall, Government House, Kano, Kano State.

Emir Sanusi urged adherents of the two major religions to respect each other’s religion to avoid future religious disharmony in the state and the country at large.

Meanwhile, the chief host of the occasion and Kano State governor, Dr. Abdullahi Umar Ganduje, disclosed that research has shown that most of the religious conflicts experienced in the country were in one way or the other triggered by the elite to divide the adherents of their respective religions.

The governor stressed that Islam and Christianity enjoins its followers to live in peace and preach peace as neither of the scriptures of the two religions preach violence.

Ganduje, however, expressed optimism that the people of Nigeria will embrace each other irrespective of religious conviction, noting that his administration decided to convene the conference considering the fact that Kano is adjudged to be truly Nigeria’s state with cosmopolitan nature.

He also charged the participants to practice what they have learnt from the conference.

The conference attracted prominent religious leaders in the state among them Chairman of the Kano State chapter of Christian Association of Nigeria, CAN, Rev. Ransome Bello as well as other Christians and Muslims clerics.