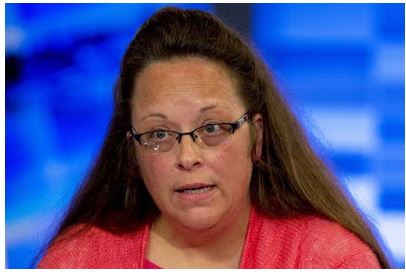 Kentucky Republican Gov. Matt Bevin ordered the state to prepare new marriage licenses that do not include the names of county clerks, in an attempt to protect the religious beliefs of clerk Kim Davis and other local elected officials.

Bevin said he directed the Kentucky Department of Libraries and Archives to issue the revised marriage license forms to all county clerks. The executive order comes after Davis, the Rowan County clerk, spent five days in jail for refusing to issue marriage licenses to same-sex couples. Davis said she could not issue the licenses because they had her name on them.
Bevin said he issued the executive order to “ensure that the sincerely held religious beliefs of all Kentuckians are honored.” It was one of five executive orders he issued Tuesday, the first of his administration, that mostly revised or suspended recent actions by former Democratic Gov. Steve Beshear.

“Today, I took action to uphold several commitments I made during my campaign so that we can implement real solutions that will help the people of Kentucky,” Bevin said in a news release.

It’s unclear how Bevin’s order will affect a federal lawsuit brought by four couples against Davis. One of Davis’ deputy clerks has been issuing altered marriage licenses to eligible couples since September. They do not include Davis’ name or the name of the county.