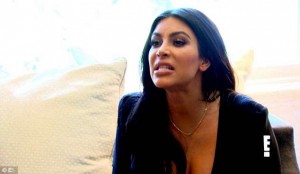 World famous Reality TV star, Kim Kardashian has slammed her mum and manager Kris Jenner for encouraging Khloe Kardashian to be with Lamar Odom before he overdosed.

The 35 year old mother of two got into a heated argument with her mum which has been released as a teaser of this week’s episode of Keeping Up With The Kardashians.

“[Khloe] talking to Lamar and you saying Lamar deserves a second chance – that is so wrong and that’s being a bad mother!” Kim K yelled at her mother. “You just have a sentimental thing with Lamar, and at some point, you have to get over it. What you did created a bigger stream of problems” she further said.

The KUWTK episode was filmed before Odom’s overdose in October. During this period Khloe was in the process of finalizing her divorce with Odom.

Kris Jenner however fired back at Mrs. Kanye West. “Okay, but you weren’t going to give me the benefit of the doubt. I always want what’s best for daughter” Kris said obviously hurt from her daughter’s comments. The argument continued between mother and daughter.

“She’s way out of line to speak to me like this. I would never do anything to intentionally upset my kids, I just love Lamar. And she’s got to respect that too,” said Kris Jenner when she was interviewed on the episode of the reality show.