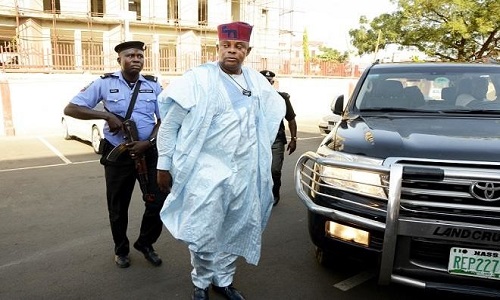 Kogi State Governor Idris Wada and the Deputy Governorship Candidate of the All Progressives Congress (APC) James Faleke, yesterday, lost their bid to stop the Independent National Electoral Commission (INEC) from conducting today’s supplementary election in the state. They failed to persuade the Federal High Court sitting in Abuja to declare the make-up polls as illegal, unconstitutional and ultra vires the powers of the electoral body.

In its ruling yesterday, the court declined jurisdiction to determine the merit of both Wada and Faleke’s suits. Noting that the legal actions were precipitated by the governorship election held in Kogi State on November 21, Justice Kolawole directed all the plaintiffs to go and ventilate their grievances before the Election Petition Tribunal.

He described all the issues that were canvassed in the various suits as “post election matters”, which he said could be effectively decided by the Governorship Election Petition Panel that will be duly constituted by the President of the Court of Appeal.

“To proceed to affirm or otherwise the 1st defendant’s (INEC) decision will be nothing short of exercising jurisdiction, which this court does not have under section 87(10) of the Electoral Act.

“Once electorates have gone to the polls, whatever happens thereafter can only be entertained by the tribunal which have the powers to hear petitions by candidates or political parties that sponsored them,” the Judge held.

He continued: “I am not in doubt that all the issues of law and facts that were raised before this court can be canvassed before the governorship election petition tribunal. I have no doubt that all the legal issues are such that the tribunal has jurisdiction to entertain. This judgement shall not operate before the election tribunal as res-judicata as this court has not decided any of the suits on the merit.

“Though the court as the judicial arm of government, has a duty to not only uphold and protect the constitution, but to avoid decisions which will undermine or endanger the democratically laid down electoral process. The process, no matter how imperfect or faulty it may be, is the only means by which any citizen who is aspiring for an elective office can assume governmental power.

“Court has power to assume jurisdiction in a way and manner that will assist the system to run its full course. The laws have made provision for an election tribunal, which is an alternative forum where disenfranchised candidates can go to ventilate their grievances.

“Let me state it again lest I be misunderstood, this court has not in this matter, taken a position similar to that of the Biblical Pontius Pilate, the governor of the Jews who washed his hands off the blood of the innocent.

“Where the court has jurisdiction, I am confident that the arms of the law is not too short for it to make the necessary declaratory orders. However, the court will only do so within the parameters of its statutory and constitutional powers.

“The plaintiffs’ course of action is within the event of the Kogi state election of November 21, which is not cognizable by the Federal High Court under section 285(1) of the constitution and section 87(10) of the Electoral Act.

“With all I have said, the four suits are hereby struck out for lack of jurisdiction. There shall be no order as to cost,” Justice Kolawole added.

The judge urged politicians to learn from former President Goodluck Jonathan and erstwhile Governor of Ekiti State, Kayode Fayemi, who he said were exemplary political characters. Besides, Justice Kolawole took an indirect swipe at the Attorney General of the Federation and Minister of Justice, Mr. Abubakar Malami, SAN, for giving “a partisan or otherwise legal opinion in a contest that is not exclusively an APC affair, but involves multiple political parties”.