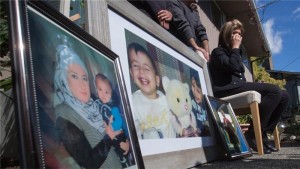 The father of Alan Kurdi, the Syrian boy whose photo sparked a worldwide outcry about the fate of refugees travelling to Europe, has appealed for the world to open its doors to those fleeing the war in Syria. In a preview of UK broadcaster Channel 4’s Christmas message, intended to provide an alternative to the Queen’s annual message, Abdullah Kurdi says: “My message is I’d like the whole world to open its doors to Syrians”.

Kurdi’s three-year-old son Alan, five-year-old son Galip and wife Rehan died in September as they attempted to make the perilous crossing between Turkey and the Greek island of Kos.

Heart-rending photographs of Alan’s body washed up on a Turkish beach put a human face on the dangers faced by hundreds of thousands of desperate people who risk their lives to seek a new life in Europe. “If a person shuts a door in someone’s face, this is very difficult. When a door is opened they no longer feel humiliated,” Abdullah Kurdi said in his Christmas message.

“At this time of year I would like to ask you all to think about the pain of fathers, mothers and children who are seeking peace and security. We ask just for a little bit of sympathy from you. “I wish you a very happy new year. Hopefully next year the war will end in Syria and peace will reign all over the world.”