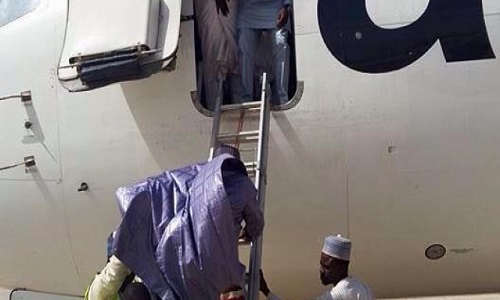 As the federal government gets set to wield the big hammer against those culpable in the use of ladder to disembark passengers of an Aero Contractors Airline chartered flight at the Bauchi Airport on Saturday, the Federal Airports Authority of Nigeria (FAAN) yesterday said it had no hand in the incident.

The denial came against the backdrop of a statement issued by Special Adviser to the Bauchi State Governor on Media and Communications, Yakubu Ibn Muhammad that FAAN is responsible for the maintenance and management of the Sir Abubakar Tafawa Balewa International Airport, Bauchi.

“In times like this, it is our collective responsibility to pray for our dear state and not point accusing fingers at anyone. In any case, FAAN and not Bauchi Government is responsible for the maintenance and management of the Airport”, the statement by Muhammad read in part.

But in a rebuttal yesterday, FAAN said the airport was not managed by it but the Bauchi State government.

The clarification, according to its spokesman, Yakubu Dati, became imperative because of insinuations attributing the use of unauthorised equipment to FAAN.

In a statement, Dati said: “Without prejudice to the directive given by the minister of state for Aviation for investigation into the cause of the incident, we wish to clarify that Aero Contractors’ use of unauthorised equipment (ladder) to disembark its passengers does not have anything to do with FAAN.

“The Bauchi Airport is managed by the Bauchi State government and FAAN only provides statutory services at the airport, such as aircraft marshalling, aviation security services and fire cover.

“The Authority does not provide handling services for Aero Contractors and therefore does not understand why it should be held responsible for the non-provision of appropriate equipment for passenger disembarkation.

“We also do not understand why the absence of marshallers on the apron, as claimed by the airline, could cause the use of unauthorised equipment for the disembarkation of passengers from the aircraft.

“We urge the public to discountenance any story linking FAAN, in any way, with the use of unauthorised equipment by Aero Contractors at the Bauchi Airport”.