A middle-aged man whose name was given as Abibu Olusola was yesterday arrested by Aviation Security (AVSEC) at the local wing of the Murtala Mohammed International Airport after he got blasted by the captain of an aircraft taxiing to take off. 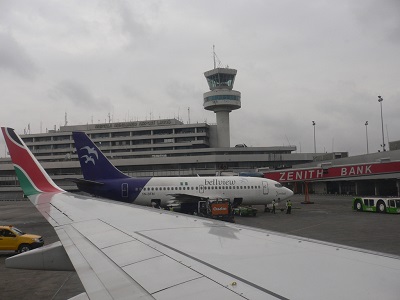 An official of the Federal Airports Authority of Nigeria who works at the airfield of the airport described the man as a mad man, saying the incident, involving a Medview Airline Boeing 737 aircraft occurred at about 1.51pm when “a mad man” gained access to the security area of the airport through one of the several porous ways from Shasha area.”

The source said after the man gained access from a low section of the airport security fence and was walking towards the Maiduguri-bound Medview aircraft, which was on the threshold to take off, the captain of plane had to apply a safety measure to blow the man away from the runway.

“So the captain blasted him and he sustained burns. The blasting is a safety measure to both save the lives of over a hundred passengers in the plane and the man too,” the source said.

It was gathered that the man had an identity card which identified him as a director of a company at Shasha, but became insane recently.

“The man was carrying a bag and was attempting to throw the bag at the plane, which made people took him for a terror suspect initially,” the source added.

He said the man was taken away immediately the incident happened.

The porosity of Nigeria’s airports has become a source of concern, as incidents of stowaway have become too regular. Over the years, people living along Shasha, Ejigbo and Akowonjo areas of Lagos, building houses very close to the runway, with many other activities right inside the airport.

Confirming the incident, spokesman for Medview Airline, Mr Oyibotha Obuke in a statement said the action of the crew, which led to the arrest and the return of the aircraft to the tarmac for security check was in line with International Civil Aviation Organisation (ICAO) recommended best practices on aviation security.

According to him, the Maiduguri-bound aircraft via Abuja was taxiing to the threshold for take-off when the pilot sited a man on the active runway and alerted the control tower on his observation and requested for aviation security personnel.

While still taxiing, the pilot noticed that the same man has crossed to the threshold, and was moving towards the aircraft, and had to alert the control tower again for security.

The man got entangled with the engine thrust pilot increased the speed of the engine before he was picked up by security agents.

“The pilot asked for permission to return to base, where security agencies including Bomb disposal Squad conducted a thorough check on all passengers, luggage and the entire aircraft and appropriate clearance was given,” he said.