Home National News Odd News Man Arrested In His Attempt To Pick Up His Girlfriend From Prison...
Facebook
Twitter
WhatsApp 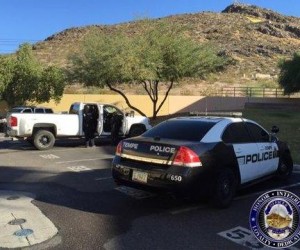 An Arizona man was arrested after attempting to pick up his girlfriend from prison in a stolen vehicle.

Tempe police tweeted a photo of a white pick-up truck alongside a squad car with the caption “Chivalry: Picking up your girlfriend from jail in a stolen truck.”

Police were alerted by the license plate-reader as the stolen truck drove past and proceeded to pull the vehicle over.

Upon questioning, the man told police he had borrowed the truck to pick up his girlfriend from prison. He was taken into custody as police continued to investigate.