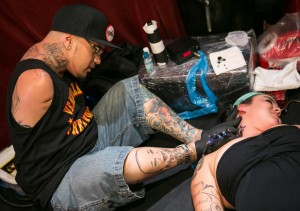 27-year-old Brian Tagalog was born without arms, but he has never let this serious adversity keep him from leading a normal life. He learned to use his feet to perform mundane tasks, drive a car, fly planes and even ink intricate tattoo designs. The ambitious young man believes he is the only certified tattoo artist without arms in the world.

A native of Honolulu, Hawaii, Tagalog moved with his family to Tucson, Arizona, where he attended Sunnyside High School and the University of Arizona. He had always shown an interest in drawing, and set his mind on becoming a professional tattoo artist. Not many people gave him a chance, but he steadily honed his foot drawing skills, and after his aunt helped him buy his first tattoo gun, he learned to operate it with his toes just as well as others did with their hands.

Angie Tagalog, Brian’s mother, admits that raising him was not easy, but she always made it a point to let him explore his options. “The day I gave birth to him, well, I freaked out,” she recalled. “The first year I would cry almost every day. I still do every now and then. But we never hid him. He wore a tank top when he was a newborn. I didn’t shield him in any way.”

And perhaps that’s what gave him the confidence to achieve everything he’s ever wanted, despite the very obvious absence of two limbs. “I was born without arms,” he said. “But that has not slowed me down.”